Nostradamus Advertising has handled a wide range of assignments for Jewish organizations, including advertising, public relations, direct mail and graphic design. We are probably best known for the many prayerbooks we have designed and typeset.

We have been writing copy for Israel Bonds (Development Corporation for Israel) for years. Here is a particularly nice series of promotional advertisements that we wrote.

Since the mid-1980s, we have been designing books for the CCAR Press. Not shown are the book catalogs, posters, direct mail pieces and advertisments we created for them.

We handled the typesetting and production for the Reform Movement's new congregational prayerbook, Mishkan T'filah. We began work in the summer of 1999. After producing nine preliminary versions, the project finally went on press in the summer of 2006. Mishakn T'filah is now available in regular and large print format; in weekday or Shabbat or combined weekday-Shabbat editions; with transliteration or without; in a gift edition or regular binding -- 10 variations in all. The most popular editions are already in their third printing.

Other book projects for the CCAR:

We designed and typeset Moreh Derekh, the rabbi's manual of the Conservative movement. 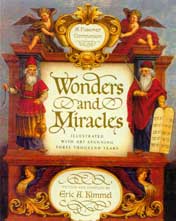 We set the Hebrew type for this beautiful children's Passover book from Scholastic.

A number of these projects would have been impossible without the help of our longtime associates Warren Wolfsohn (Hebrew typesetting) and Wendy Wolf (desktop publishing). Because the actual covers of Derekh HaShatz and Moreh Derekh are simple blind stampings, we created more interesting graphics for use on this web page. The picture of the cantor's hat comes from GotJudaica.com.